For me, the summer of 2019 was one of the better ones I can remember.  Plenty of hot, humid days and not too much rain.  We attended and hosted some great gatherings.  Fall is here and we’re just starting to see the temperature drops that remind us winter isn’t far off.  I hope you all enjoy the fall and get all the preparations in place for winter.  It will be here soon.

The photo below is Gillan, a new addition to our home.  We adopted Gillan from a local CT rescue and now have four dogs…but there was some logic to this choice.  Our oldest, Pharah, is over age 15 and suffering from two different forms of cancer.  We know her time is limited.  Pharah is close to the other two dogs and we felt introducing another dog for them to bond with would help the transition when Pharah leaves us.  Gillan has been great so far and everyone gets along nicely.

For more info on the organization we rescued him from, please visit www.omdrescue.org 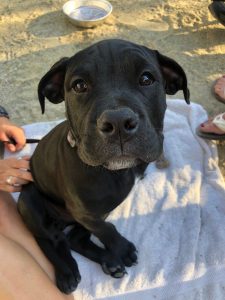 The U.S. market started in July with some volatility, dropped in August then recovered during September ending just slightly ahead of where it started in July.  There are a variety of explanations for this market behavior ranging from concern over the alleged trade war, to U.S. political tensions and escalating talk of Presidential impeachment, to undeniably weaker global growth data being reported.  The most recent rumors of trade talks with China have not substantially moved markets, suggesting that may not be the underlying reason for market behavior.  While I believe current political gyrations can impose short-term market effects, the idea of slowing global growth, and the mounting data of that condition is a more likely culprit.  Bonds in the U.S. were up more than stocks, which is somewhat unusual.  Stocks moving up while bonds also move up (i.e. interest rates down) suggests a deflationary bias for the market.  Growth appears to be slowing, driving interest rates lower, raising bond prices but also encouraging stock investors to buy stocks hoping lower rates will stimulate the economy and raising stock prices.

Looking back now on monetary policy, and after having two back-to-back interest rate reductions, I’ve changed my mind on rates.  Last quarter I questioned the logic of interest rate reductions based on comments from Federal Reserve (Fed) Chairman Jerome Powell.  Now my fundamental analysis suggests that interest rate pressure is lower overall, inflation pressure is low, and the neutral rate the Fed seeks is lower than it’s been historically.  Given that we have about $15 trillion in negative yielding foreign debt, and the upward pressure this has put on the U.S. dollar, I don’t think the Fed had much choice but to lower interest rates.  I expect that lower rate pressure to continue.  As I said last quarter, the U.S. economy isn’t as strong as it was in 2017, but it’s also not weak.  I do worry about slowing global growth, but the U.S. economy does not depend on exports to sustain itself, so this expansion should continue.  For markets, I’ve said before that markets respond to where capital flows, and capital continues to flow toward the U.S.  That will change at some point in favor of international or emerging markets, but it is not happening currently, and I don’t expect that to change anytime soon.

For the fourth quarter, I will be adding exposure to core U.S. stocks and core U.S. bonds and reducing exposure to emerging market stocks.  In an unusual move, I am removing all exposure to inflation protected bonds as I believe the current fundamentals strongly suggest lower rates moving forward and inflation seems an unlikely path for now.  Real estate will remain the sole alternative investment choice.