Hello Fall.  After an absolutely beautiful, hot and quite dry summer, we now find ourselves on the threshold of fall.  As pretty as fall is, I can’t seem to fight the mild depression of knowing winter is a short time away.  We’ll do some hiking and make the best of it.  I hope you all enjoy the fall and prep for winter as best you can.  Stay safe.

The photo is our advisor, John, his wife Marissa and their new baby, Jack.  Jack was born 1:52 AM on August 15, 2020.  Mother and baby are happy and healthy and the new parents are learning, and loving their new assignment.  John has been a great addition to our firm and we couldn’t be happier for them and their new bundle of joy.  We hope Jack follows in the hard-working footsteps of his parents.  Feel free to give a call or shoot an email of congratulations. 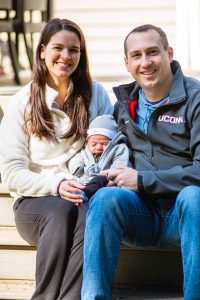 The third quarter hit some depressing milestones as related to the COVID-19 pandemic.  In the U.S., the world’s hardest hit country, COVID deaths broke the 200,000 barrier and global COVID deaths now exceed 1,000,000.  The economic impact is not yet fully understood and until the virus dissipates or we have herd immunity, the economic toll will only increase.  It’s hard to believe the staggering impact we have seen caused by the virus.  Here’s hoping we don’t see a second wave and a vaccine becomes available soon.

Our government came together in a very bi-partisan way in March 2020 with Congressional approval of the CARES Act and subsequent signing by the President.  The $2.2 trillion CARES Act provided needed relief to individuals and businesses affected by COVID-19.  Most economists believe the CARES Act reduced the overall economic damage, and helped encourage the recovery that began in June.  Since March, Congress has proven far-less bi-partisan and has not been able to pull together a second relief package.  The concern is that many components of the CARES Act had specific end-dates and those benefits are now ending, leaving many in a difficult position.  A second fiscal stimulus package is almost certainly needed.  I hope it happens sooner rather than later.  Speaking of the stimulus, it’s important to understand that these stimulus packages are entirely built on deficit spending, making our national debt climb at an unprecedented peacetime rate.  It’s also important to understand that the stimulus package is money being directly injected into the economy.  This is nothing like the quantitative easing used back in 2009 after the Global Financial Crisis (GFC).  That money went into bank reserves and was closely controlled as to how and when it got into the economy.  This means that today’s fiscal stimulus packages have the potential to create future inflation.  It’s not guaranteed, but we are paying close attention because investments will need to shift if inflation makes its way back into our economy.

Looking ahead, we expect to see strong Gross Domestic Product (GDP) growth in the third quarter, making for a very short recession of only one quarter.  We believe the economy will continue to recover as people and businesses get more back to normal, and that should support continued gains in the stock market.  The S&P 500 is currently at 3,363 and we think a reasonable estimate for year-end should be around 3,500.  However, there are some concerns to consider.  We are in the middle of a pandemic and we don’t know if we will see a second wave.  If we do that could result in shutdowns similar to what we experienced in April.  Europe appears to be in the early stages of a second wave and the idea that it will come to the U.S. is not unreasonable.  We don’t yet have a vaccine and though there seems to be high confidence one is coming, it can’t help until it is actually available and proven safe and effective.  Plus, if/when we get a vaccine we still have to deal with how to get it to the American people.  The process of manufacturing the vaccine in ample volume and distributing to citizens will take months.  Any issues along the way have the potential to upset the markets.  Knowing this I am having some difficulty understanding how the S&P 500 hit a new all-time high in early September.  No one hopes all will go well more than me, but ignoring the potential problems seems a little too optimistic for my liking.  Given all that, our estimate of 3,500 for the S&P 500 seems reasonable, though it could be a volatile ride getting there.