Well, we’re getting toward that time of year when, while we might still have some nice weather days, we need to say goodbye to summer.  Not the best summer weather-wise, with a cold start in May and June, a near washout of rain in July, and not enough hot weather in August to make up for it.  Although our current dog issues remain, we did get out more for hiking and it has been a welcome return.  We didn’t realize just how much we missed it.  I hope you all had a terrific summer and look forward to what is predicted to be a beautiful fall.  Be safe and well.

The photo shown is one from our annual family gathering at my house in Goshen.  What a great party this year after forgoing the party last year due to COVID.  We had great representation at the party with many out-of-staters attending and seeing family, some for the first time in two years.  States represented included New York, California, Virginia, Florida, Vermont, Wisconsin, Maryland and South Carolina, New Hampshire, and Delaware.  It was a great time and I’m so happy we all continue to do the work and take the time to make it happen. 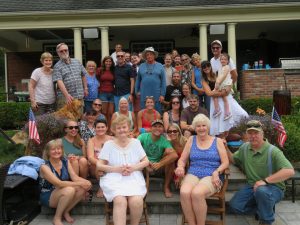 Looking at global affairs, it would be hard not to say that the biggest event from the third quarter was the U.S. withdrawal from Afghanistan.  After 20 years of war in that country, and a failed attempt at nation-building, the U.S. packed up and left Afghanistan by the agreed upon date of August 31, 2021.  The images from Afghanistan reminded many of the U.S. withdrawal from Vietnam and the helicopter driven evacuation of Saigon.  The images stood in stark contrast to the expectation that the Afghan government and military would be able to resist full takeover by the Taliban.  In the end, the Afghan government fled the country and the military collapsed without a single shot fired.  All the stories of progress with the training of the Afghan military, and the billions of dollars spent, proved to be no match for the fully motivated Taliban.  I try to be objective on these kinds of events.  Yes, images of the evacuation were ugly, and the suicide terror strike that killed American soldiers was tragic, but I’m not entirely sure how you end such a long operation, and remove people and equipment, without it looking chaotic.  So, I want to avoid the Republican approach of condemning the President and his staff, often without any real constructive views of what they would have done differently.  On the flip side, it seems hard to understand why so many Americans, and U.S. friendly Afghans were not evacuated sooner, only to be left stranded with limited options and facing what is expected to be a very unforgiving Taliban.  Was the evacuation planning done as well as it could have been?