Both Sandra and I are in agreement that this was one of the nicest summers we remember a while.  Here in CT we had a couple of nice heat waves, which made for great time at the pool.  Granted, not much rain, and our lawn got almost completely fried, but we’ll take that in a compromise.  Fall is now here, and we know what’s coming next.  Oh well, we’ll make the best of it as always.  We hope you all had a great summer and are making preparations for the coming winter.  Enjoy and be safe.

Not a whole lot to report on the personal side for last quarter.  As always, every year Sandra and I hosted our family reunion picnic, that we lovingly call the “Cousin’s Picnic” because the cousins have become so close over the years.  This year’s picnic was smaller than past years because of personal commitments with some of the usual attendees.  But it was a great time nonetheless.  The weather was good and everyone enjoyed time in our pool.  It’s a big commitment to host this party every year, but well worth it from our view.  The picture above shows our group photo, another annual occurrence. 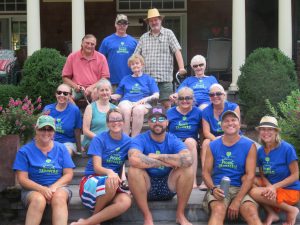 This continues to be a very strange, and difficult to predict market given the high inflation we are experiencing.  We had a nice rally going from the about the middle of June to the middle of August, because the inflation story seemed to be improving.  Then the August inflation was announced at 8.3%, not much below the 8.5% from July.  That sent the market down because investors are wondering, justifiably, if the Federal Reserve (Fed) raising interest will be enough to contain inflation.  And I expect this volatility to continue until that question is better answered.

We continue to believe it is too late to sell, and possibly, too early to buy.  We also feel inflation won’t be contained until the Fed raises interest rates enough to send us into recession, which we feel will happen in 2023.  We’ve moved from a 50-50 2023 recession view to 70-30.  On the plus side we are seeing some improvement in the labor market, but much slower than hoped.  We are also seeing improvements in the supply chain that is helping the economy normalize.  The bad news is that the current Cleveland Federal Reserve Bank inflation estimator is seeing inflation in September around 8.2%, barely below the August reading.  Let’s hope that turns out to be incorrect.  We still believe a rally into year-end is possible, as we expect the inflation story to improve, but our expected market recovery is now pushing into late 2023 or even 2024 due to the likely recession in 2023.  We repeat what we said last quarter, as hard as it is, we have to grit our teeth and get through this volatility.  Better days are coming.

Globally, I want to come back to a topic we covered last quarter, the war in Ukraine.  Last quarter I suggested that given the fact that Russia was grinding on the Ukrainian military, and gaining territory slowly but surely, that Ukraine was going to end up in a negotiated settlement that compromised their sovereignty.  At the time last quarter, we believed this was absolutely true given the circumstances on the ground.  But, as is so often the case, things have changed.  Let’s start by talking about the military support Ukraine received after Russia’s invasion.  The U.S. led NATO countries in supplying arms to Ukraine to allow them to repel Russia.  The majority of weapons shared were mostly defensive weapons.  Especially anti-aircraft and anti-tank weapons that greatly helped Ukraine slow the Russians, but it did not stop their advance.  The U.S. did not supply Ukraine with more offensive weapons in an effort to reduce potential escalation with Russia.  The U.S., and NATO, do not want a direct conflict with Russia.  But as it started to become clear those defensive weapons could not stop Russia and the Russians continued to gain territory and all but fully absorb the eastern portion of Ukraine all the way south to Crimea.  The U.S. and NATO decided to change strategy and supply Ukraine with more offensive weapons such as rocket and missile systems that could strike Russia from extended distances.  You may have seen the HIMARS (High Mobility Artillery Rocket System) mentioned as a key element.  These systems allow Ukraine to target Russian logistics and storage areas, which has proven a game-changer in the war.  Ukraine has now taken back some territory and continues its counterattacks.  Ukraine has even been able to attack areas that are directly in Russia, much to the Russian’s dismay.  On a side note, Russia at this point has proven it isn’t even a real regional military threat, let alone a global one.  Vladimir Putin has put his country’s shortcomings on full display.  It will take Russia decades to recover from this, no matter the end result.

Now, getting back to the current situation, we believe it remains true that this is Russia’s war to lose.  They have more men, more artillery, more tanks and unlike Ukraine, Russia has actual military and war experience.  All of which suggest that Russia may very well re-group and once again start overtaking Ukraine’s forces.  Some of this will be determined by how much more the U.S. and NATO countries will be willing to do, and how much more military equipment they will provide.  There’s no doubt this is getting expensive, and some countries have already started balking at throwing money into Ukraine.  It will be interesting to see how this continues to play out.  As we pointed out last quarter, the U.S. won’t tolerate Russia taking over Ukraine and being directly on the border with Poland.  But a partial territorial settlement to end the war might be a reasonable compromise from the U.S. view.