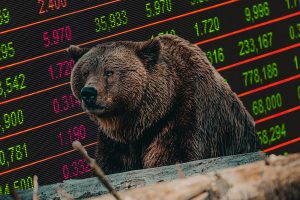 This year has been a tough year for investors.  At its worst the S&P 500 was down -25% in mid-October.  Currently the S&P 500 is down about -16.5% for the year.  What we find particularly frustrating about this year’s market is that the second half of 2021 looked so good, with the S&P 500 up over 13%.  That lead into 2022 gave no indication of high inflation or a coming recession.  As we reported back in August, we continue to think a recession is coming, but the bear market story is more complicated than that.  In particular please note that the rising interest rate environment we are in has been a disaster for bonds.  Meaning portfolios have seen no buffering between their equity and bond positions.  The U.S. aggregate bond market is down over -13% so far in 2022.  In today’s Financially Speaking we want to look more closely at the current market and economic conditions and evaluate how we got here, what we think is happening, and why.  As always, the team at Barron Financial Group are only a phone call or email away if you have further questions or prefer a personal discussion.

Where It All Started

After what seemed like a strong finish to 2021, the market started dropping on January 4, 2022.  It was a relatively aggressive drop that lasted until late January, with a partial recovery into early February, then another drop into mid-March.  We then had another partial recovery to the end of March, and another series of drops until we hit the (then) YTD low on June 16.  At that point the market was down -23% and we were officially in bear market territory (often referred to when the market is down -20% or more).  A strong partial rally then occurred until mid-August followed by another sharp drop to the current YTD low on October 12.  We’ve seen some recovery since then, with a more recent leveling out at roughly -16.5% for the S&P 500.

December of 2021 had an annual inflation rate of 4.7%.  Then in January 2022 the inflation rate registered 7.5%.  That’s a big jump and we feel that it is the reason markets were jittery in January.  Then the February inflation rate hit at 7.9%, another increase that sent the market down again.  March followed that with an inflation reading of 8.5%, then climbing to a maximum reading of 9.1% in June.  Here again, we feel these inflation readings are a big part of what has the market in bear territory.  The October inflation amount was a relief at 7.7%, which we feel is why the market has partially recovered and recently flattened out.  As these inflation readings were playing out, the Federal Reserve (Fed) was increasing short-term interest rates aggressively.  It started in March with a not-so-aggressive increase of 0.25%.  Then as inflation became more sticky and less “transitory” (the poorly chosen early description from the Fed) they raised rates by 0.75% at the June, July, September, and November meetings.  Bringing the current Fed Funds rate to a range of 3.75 – 4.00%.  Current logic suggests the Fed will raise rates a bit slower going forward, with a 0.5% increase expected in December.  It is absolutely true that rate increases take time to filter through the economy and have the inflation lowering effect intended.  The hope is that the October inflation relief will continue.  If it does, we could see another market upswing similar to what was seen after the October inflation release.

We pay a lot of attention to the CBOE Volatility Index (VIX).  It helps us understand market sentiment and behavior.  The long run average of the VIX is 20.  With values lower than 20 signaling low volatility and values above 20 signaling higher volatility.  For reference, a one standard deviation move for the VIX puts it at 28.  We start paying attention when that happens.  Two standard deviation is 36, and we really pay attention when that happens.  The VIX has spent a good amount of time this year at or above 28, with only one occurrence at 36 in March.  Often when the VIX peaks, we see a rally as the volatility cools off.  By the same token, when the VIX gets close to 20, we often see the market drop as volatility picks back up.  The most recent peak in the VIX was in October at 33.6 with a decline to a reading now at about 22.  This kind of volatility, and its shifting pattern over time is part and parcel of a bear market.

It’s Not Getting Better Anytime Soon

Investors are, understandably, wondering how much longer this can go on.  We understand the pain.  We look at our own account statements every month and know how difficult this year has been.  The good news here is that we feel strongly about the future of the U.S. and the U.S. economy.  Current gross domestic product (GDP) readings are strong, unemployment is very low and corporate earnings have held up surprisingly well.  There’s a lot of underlying good in the U.S. economy.  The bad news is that we have some more pain to go before things start getting better.  Our logic is this:  The Fed will continue increasing interest rates.  And this will gradually work through the economy and continue to reduce economic activity, and with it, inflation.  But we feel the alleged “soft landing” of a slower economy and inflation back to pre-pandemic levels with no recession won’t happen.  We believe the Fed will keep raising rates to somewhere at or slightly above 5% and that will prove too much for the economy.  Recession will set in.  The timing is very difficult to estimate, but we believe it will happen in the first or second quarter of 2023.  We don’t think the recession will be very deep or long (more on that coming up) but it will be enough to push inflation on a path toward the 2% Fed target.  Unemployment will go up, but not dramatically.  Corporate earnings will fall, and with that expectation the market will re-test the lows set in October.  The market is a forward-looking vehicle, so trying to guess when that bottom will happen is almost impossible.  Our best guess for now is between January and March.

The reason we don’t believe the coming recession will be very long or deep is partly because Goldman Sachs is projecting that we will not have a recession in 2023.  They believe the underlying economy is strong enough, and unemployment is low enough, that we can sustain these rate hikes without recession.  Their arguments are well thought out.  And while we don’t agree with their conclusion, we do think their arguments are valid enough to support our limited recession damage theory.

Assuming we are at least partly right with our predictions, we should see a recession in early to mid-2023.  Markets will be forward looking at the depth and length of the recession and we should start seeing the market beginning its recovery mode in mid to late-2023.  As stated previously, the timing is very hard to predict, but we would expect the recovery to begin sometime in the third quarter.  This doesn’t mean we will be back to the end of 2021 market values in the third quarter, but we should be heading in that direction and the overall sentiment should be shifting more positive.  And so, we find ourselves having to be patient and get through the coming months to get to the better days.  We believe they are coming and are worth being patient for.  We believe we will see those end of 2021 market values by late 2023 or early 2024 worst case.  We will keep up with it and report along the way.