Hello Spring!  Our winter here in CT started early with the first snow in November.  I remember being worried about what the rest of winter would bring.  But now it’s almost April and the winter turned out to be relatively mild, which we welcomed.  I hope all of you have weathered your own winter season well and look forward to the better weather.  As is so common to say now, “Stay Safe”.

The photo below is our dog, Pharah.  We said a tearful good-bye to her on March 17.  We brought Pharah home from a shelter five years ago.  She had a very large tumor on her underside, which turned out to be mammary cancer.  After she endured six surgeries we had it in remission.  A few months later we brought home our puppy, Riley, and Pharah immediately took to raising him.  She had a strong maternal instinct.  And for only thirty pounds, she had spunk, not hesitating to correct him even when he was more than twice her weight.  Quite a sight to see.  Then about a year ago, she was diagnosed with advanced lung cancer.  At sixteen years old, she was incredibly resilient, but her time finally came.  We loved you Pharah.  Thank you for choosing to be with us, making our family better and raising Riley to be a great dog. 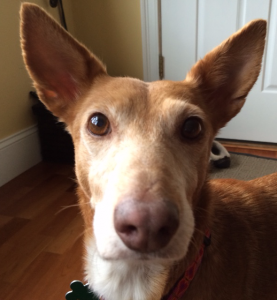 The first quarter of 2020 was, without question, one for the history books.  The world was introduced to coronavirus 2019, a.k.a. COVID-19, after its January outbreak in China.  Although not overwhelmingly notable at first, the virus quickly spread in China, then to other countries and was officially labelled a pandemic on March 11.  Investment markets were hit hard and fast.  For the quarter, the U.S. S&P 500 index was down -19.60% with the current cycle low of -30.75% on March 23.  The international market index was down -22.83% for the quarter and emerging markets were down -23.60% for the quarter.  The U.S. aggregate bond index held up in the beginning, went down as the crisis evolved, then experienced a Federal Reserve (Fed) supported rally to end the quarter up at +3.15%.  Short-term treasuries also played the role of safe haven with a quarter gain of +2.85%.

What we found amazing during this drawdown is how much this market has looked like what occurred during the 2008-2009 Global Financial Crisis (GFC).  The GFC was clearly a situation where the world was entering a recession, but the degree of financial imbalance was extraordinary and the entire global banking system was brought to its knees.  The COVID-19 crisis, on the other hand, seems far less structural, and much more event-driven.  Though the short-term impact to gross domestic product (GDP) will be severe, we believe the U.S. economy was solid going into this and we believe it will be solid coming out.  We are optimistic that the market over-reacted and level heads will prevail.

In response to the COVID-19 crisis the Fed quickly reduced interest rates to 0% and instituted programs to maintain liquidity and support the corporate bond market.  The Fed injected up to $4 trillion into the economy and banking system.  Then our legislators passed a $2.2 trillion fiscal support bill, signed by the President, to provide rapid short-term relief to workers and businesses.  Both the Fed and Congress reacted in ways similar to what they did during the GFC, but much faster.  The message is clear: go big and go fast.  In terms of managing portfolios, we believe the coronavirus pandemic has created a buying opportunity in the markets.  You don’t get to buy equities at a 20% or 25% discount very often.

To close out, we admit we’ve personally never seen anything quite like COVID-19 before, but that doesn’t mean it’s never happened.  Way back in 1918 the world was hit with the Spanish Flu pandemic that killed 675,000 in the U.S., the worst pandemic of the 20th century.  Two other examples are the 1958 Asian Flu pandemic that killed about 100,000 in the U.S. and the 1969 Hong Kong flu that also killed about 100,000 in the U.S.  These last two pandemics did exhibit a degree of government coordination and mitigation, though nowhere near what we have today.  At the time, we didn’t have a 24/7 news cycle, the Internet, or social media to help force the mitigation message.  In all of those cases there were economic effects as behaviors changed, and all of them saw a return to normal as the virus spread slowed.  That will happen this time too.  Stay safe.