Happy Spring!  After what seemed like a very long and cold winter, her in the Northeast all signs are pointing toward spring.  Not yet every day is warm and beautiful, but we’re getting at least some of those days.  It should only get better from here.  The deep snow over the winter got in the way of our normal hiking, so we are excited to get back into that habit.  Stay safe and healthy as you begin the process of shrugging off winter and enjoying spring.

The photo shown here is of our wonderful boy, Toby.  We said good-bye to him on March 16 after 10 great years at about the age of 13.  He was a spectacular dog and the hole in Sandra’s heart and my heart is enormous.  We learned a lot from Toby because we rescued him, and like many rescues he had absolutely no training, socialization or people exposure, so he was a handful in the beginning.  But we learned how to train past the challenges and helped him become a terrific pet.  And athletic…in his day he jumped a seven foot fence, not to get away, but to see people on the other side.  He could jump onto a kitchen counter from a dead stand.  We found him there more than once.  As he aged his ability to see, hear and get from point A to point B became extremely compromised.  As difficult a decision it was, we felt watching him deteriorate further was even worse.  R.I.P. Toby, there will never be another like you. 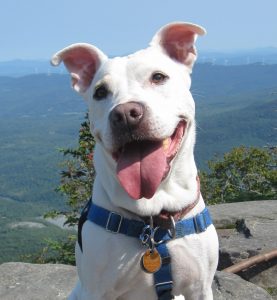 The year 2020 saw tremendous government stimulus with the $2 trillion CARES act passed in March, then the $900 billion “pandemic relief” package passed in December, for a total of $2.9 trillion in 2020 stimulus spending.  Don’t get me wrong, I believe if the CARES act had not passed in March, we would have been talking about a pandemic depression, not recession.  I’m a bit less convinced of, but still support the December measure.  Then 2021 hit with a new President and this March a third, $1.9 trillion dollar stimulus package passed using the majority 51 vote reconciliation process in the Senate.  I’m a bit more skeptical of this package as a review of the details shows only about 10% of the spending is directly tied to COVID-19 relief.  Add to that another 49% of the spending in less-direct COVID relief, such as support for state and local governments, which I support.  The remaining 41% of the spending is somewhat harder to identify, and from what I’ve found, seems much more politically driven.  In total, that adds up $4.8 trillion in government stimulus spending in less than 18 months.  That’s an astounding amount of money and let’s be clear, it’s all borrowed.

The first quarter of 2021 proved to be another good one for both U.S. and global markets.  The S&P 500 was up +6.17% hitting new all-time highs in March.  International equities were up a somewhat less impressive +3.48% and Emerging markets were up slightly less at +2.29%.  Bonds were down -3.37% as we are seeing rising interest rates (always bad for bonds).  Short-term treasuries were down less at -0.05%.

So, we have substantial amounts of government money being spent, and as I’ve discussed before, a good amount of this money is being injected directly into the economy.  Judging solely by the amount of M2 money (M2 consists of cash, bank notes & deposits), which is up over 25% in the last year (normal annual M2 growth is about 6%) we can start to see why interest rates are rising.  That amount of M2 growth is driving concerns of runaway inflation based on the teachings of Milton Friedman.  As inflation fears and predictions rise, interest rates get bid-up mostly in the intermediate to long-term maturities.  This is why 30-yr mortgage rates were 2.77% at the end of 2020, and hit 3.42% this past March.  Still a low rate in the grand scheme, but a very noticeable rate of increase for sure.  For this reason, at least in part, the Federal Reserve (Fed) continues to hold short-term interest rates near 0%.  Some of this is driven by their desire to encourage lending and spending within the economy, but some of it has to do with the near $5 trillion in recent borrowing by the government and trying to keep the interest payments on that debt as low as possible.  The Fed has a careful balancing act to manage because part of their mission is to maintain stable pricing, so any kind of accelerating, or runaway, inflation would indicate a need to move short-term interest rates up.

Thinking about the pandemic, recent developments are encouraging.  We now have three vaccines in circulation with nearly 2 million vaccinations happening each day.  The much talked about herd immunity we hope to achieve is considered as possibly happening by the end of April, with more skeptical experts predicting end of June.  Either way it seems we can look forward to a summer and fall with our world getting closer to normal compared to what we experienced in 2020.  I certainly hope that is true.