After what seemed a long winter, we are now starting to see signs of the coming of spring. Temperatures here in CT haven’t been very warm, but warmer than in January. We are just starting our spring clean-up and getting ready for the nicer weather. We are excited for that. I hope you all have persevered through the winter and like us are looking forward to better weather. Stay safe and be well.

I am so happy and proud to talk about a recent program we’ve helped establish in the Torrington area. Stock the Shelves is a food insecurity charitable program founded and sponsored by Barron Financial Group, Torrington Savings Bank, Elevator Service Company, NWCT Community Foundation and Conquest Consulting. Each of these founding companies paid into the cash fund and numerous locations are collecting food donations for distribution to local area food security providers. For Barron Financial, all the credit has to go to our advisor John Seagrave as he and a few others came up with the idea and launched the whole thing. We couldn’t be happier. Great job John and all the others. A very worthy cause. 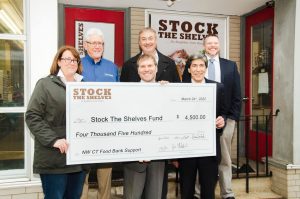 After a very strong 2021 (and 2020 and 2019) the market has pulled back since the start of 2022. After a very positive December the S&P 500 hit its all-time high on January 3, 2022, and then the retreat started. The market fell precipitously until late January, had a slight recovery into February, then fell again after the Russian invasion of Ukraine. For the quarter the S&P 500 was down -4.60%. International markets were down -6.61% in the first quarter. Emerging markets were down -6.97% for the quarter. Short treasuries were down -2.45% for the quarter.

The world is suffering from the combination of pandemic induced supply chain issues, pandemic induced labor market problems, inflation, and now the war in Ukraine. These items together were too much for the markets. But, by the end of the quarter the S&P 500 was down far less than its low point on March 8, 2022. At that time the S&P 500 was down about 15% and we closed the quarter down less than 5%. Not a full recovery, but a noticeable uptick. I continue to believe that the underlying economy in the U.S. is strong, and we have a good chance of closing the year in the green, although nowhere as strong as the last few years. The supply chain and labor markets are improving and I believe they will continue to do so, which will have a positive impact on inflation. I expect we will be seeing these improvements more clearly by the third quarter. The one big unknown is the war in Ukraine. I don’t believe it will escalate into a direct conflict with NATO countries. But the risk of escalation is very real. With Russian forces so close to NATO country borders, a military error could draw NATO into the conflict. If NATO gets involved directly then my thoughts on the markets this year will change. For now I am staying with my base case that it does not escalate and U.S. markets will recover by year end.

Without question the biggest story so far this year is the Russian invasion of Ukraine.  Let me be clear that I believe this invasion is the biggest geopolitical event of my lifetime.  Russia has decided to invade, destroy, and politically takeover, a country it feels needs to be part of its sphere of influence.  This kind of invasion hasn’t happened in eighty years.  Russia is systematically destroying Ukraine with most attention currently being paid to the east, southeast and southern regions.  Entire cities have been leveled.  It is catastrophic.

The good news, as best we can understand it, is that the Ukrainian military, and even citizens, are pushing back and holding up against a vastly superior force.  Russia has more men, more guns, more tanks, and more artillery than Ukraine.  But Russian errors in planning and logistics have prevented the 72-hour full takeover many experts were expecting after the invasion.  Now we are a month into the war and Ukraine has not fallen.  NATO countries have been a huge help by sending important military equipment, mostly anti-tank and anti-aircraft weapons that have stunned Russia’s advance.  Every day that goes by makes people wonder if Ukraine could win this war.  Others believe it is only a matter of time before Russia gets its act together and ramps up its wanton destruction.  We’ll just have to wait and see.

So, what does this all mean going forward?  Well, let’s assume Russia does get its act together and starts more forcefully, and effectively bombarding Ukraine into submission.  Ukrainian President Volodymyr Zelenskyy may be forced to capitulate to Russia, give up his polity and allow Russia to control all of Ukraine’s territory.  The other option to this scenario is that NATO continues to shuttle military equipment into Ukraine and the resistance continues a long, and bloody, fight.  Given the amount of valor and courage displayed by the Ukrainians this option is not outrageous.  The second scenario is that given the high level of setbacks and losses Russia has experienced they decide to back away from the western and central areas of Ukraine and focuses on the eastern region and the land bridge to Crimea.  The logic here being that they effectively take over those areas and either formally, or informally, annex them.  The Ukrainian response here would be a difficult choice; give up territory and sovereignty or continue to fight a guerilla style resistance to retain Ukrainian territory.  Not an easy choice.