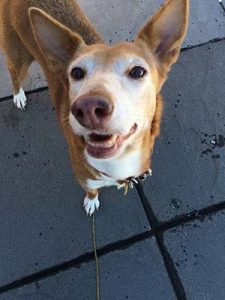 Spring this year seemed warm and short and now we’re fully into summer.  For the most part the weather has been beautiful, although the lack of rain here in CT has most lawns already going into dormancy.  Summer in New England is short, so I hope you are all able to go out and enjoy it as much as possible.  Have fun and be safe.

The picture in the upper-left corner is our adopted dog, Pharah.  Pharah has been with us since last March, and she just underwent her fourth surgery since then.  Pharah has cancer.  At an estimated ten years old, she has proven an incredibly resilient dog.  Pharah was placed for adoption at the Little Guild shelter in Cornwall, CT and we fostered her because of the medical treatments she was getting.  Sadly, her cancer will likely shorten her life, so we adopted her to make the most of her remaining years.  I think we’re all pretty lucky.  For more information about the Little Guild shelter check out their website at www.littleguild.org.

Last quarter I held onto my view that we were in a sideways market that would continue for the foreseeable future.  I never mentioned the upcoming U.K. referendum on leaving the European Union (EU).  That was because I was convinced they would vote to remain in the Union and it was all just going to blow over.  So much for that!  The U.K. voted to leave the EU in a decision frequently referred to as Brexit.  Brexit caused a very rapid and more than 5 drop in the S&P 500 index and similar or greater drops globally.  I think the surprise of the referendum result was as much to blame for the market reaction as the potential economic fallout.

After a surprising post-Brexit recovery, the S&P 500 index finished the quarter up +2.5 and is up +3.8 YTD.  The International markets were down -1.5 for the quarter and are down -4.4 YTD.  Emerging markets were up about +0.3 in the second quarter and are up +6.7 YTD.  The bond market continues to hold on regardless of the expectations of rising interest rates with the Barclay’s Aggregate index up +2.2 and up +5.3 YTD.  Speaking of interest rates, our Federal Reserve (Fed) did not raise rates in June.  As you may recall, I did not expect a rate increase in June, and I don’t expect one until December – if even then.  As a reminder, the Fed’s 2015 expectation was to raise rates four times in 2016.  So far they haven’t yet raised rates once.

The U.S. market was up last quarter and is up for the year to date.  Although this could be an indicator of a positive trend in the markets, I’m not yet convinced.  The substantial market drop we witnessed in February, along with the rapid drop post-Brexit indicates to me that the markets are tenuous – even nervous.  I believe continued diligence and cautious hedging remain appropriate, though I expect the sideways market to continue.

I still do not see a recession coming in 2016.  The U.S. economy has proven remarkably resilient and has been a haven for foreign investment.  I expect that trend to continue, and possibly grow, given the new issues facing the EU.  From a valuation standpoint, the U.S. has once again become a bit stretched.  Not surprising given the U.S. “safe haven” status.  Thus, I am neutral to slightly overweight U.S. investments.  The Brexit vote has created tremendous uncertainty in the International markets and I intend to underweight International investments accordingly.  I believe the U.K. vote was greatly influenced by a strong trend of nationalism and discontent with Government elites.  This trend seems to be present in the U.S. as well.  You hear its essence frequently in our current campaign rhetoric.  This could lead to substantial political uncertainty as we move closer to the elections in November.  Uncertainty is not good for financial markets, so this is an area I’ll be watching closely.  My equity strategy is to remain fully invested, neutral on the U.S. and underweight International and Emerging Markets.  In fixed income, I remain invested with greater exposure to credit paying higher yields.  I will continue my overweight in Alternative investments.