Welcome Winter.  Here in the Northeast, the fall brought us generally comfortable temperatures, and the increasingly normal early snow.  I say welcome to winter because we can’t get to spring or summer until we get through winter.  No longer being skiers, Sandra and I just try to find a way to get through winter and to better weather.  It is a nice break where I get much more time in my workshop.  Please stay safe and enjoy the winter whether you actively enjoy it or just find a way to get through it.  Be well.

The photo shown was taken on Christmas Eve and shows our two nephews with Santa.  The rumor is that their grandfather (Sandra’s father) played the role of Santa but that is not yet fully confirmed.  It was great to watch as the young boys, especially the older one, were wholly mesmerized with Santa.  For us it was a bit disappointing because due to a COVID quarantine, we watched it via Zoom rather than seeing it in person.  2020 made for unusual holidays for many, but we look forward to improvements as we progress through 2021. 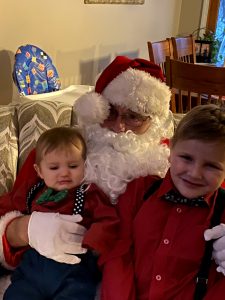 I’ll start with my thoughts on the November election.  Politics is an emotional topic and I’ve spoken to plenty of people who have strong political views.  After a contentious campaign, the country has spoken and we have a new President coming.  In 2016, the country took an unexpected turn toward a non-politician.  Four years later it has decided a lifelong politician is preferred, at least for now.  Nothing remarkable here, other than the fact that we have these elections and can fully expect a non-eventful power transition.  A testament to our Republic.

The fourth quarter continued to hit depressing COVID-19 milestones.  In the U.S. COVID cases now exceed 20 million and deaths exceed 350,000.  Remarkable numbers.  2020 also breaks the record for the total number of U.S. deaths in a single year at over 3 million (obviously, not all COVID related).

Overall, the markets responded to a very strong Gross Domestic Product (GDP) reading from the third quarter (announced in the fourth quarter) of +33.4%.  Yes, this is an incredibly strong rebound, but it doesn’t fully make up for the second quarter GDP drop of -31.4% (the way the math works, the Q3 gain gets the economy back to about 91% of what it was in Q1, before the Q2 drop).  Thus, the economy remains smaller than it was in Q1, just before the onset of the pandemic.  This worries me because we are setting new all-time market highs, as our overall economy is weaker than it was pre-pandemic.  Will the market come back to fundamentals?

Our government came together in anything but a bi-partisan way to pass the second major economic stimulus plan in late December.  At $900 billion, it is smaller than the CARES Act approved in March.  But, nonetheless, it is critical for helping individuals and small businesses that have been devastated by the pandemic.  The new stimulus plan has one last Congressional battle open, having to do with payments to U.S. citizens.  The bill has an approved amount of $600 per person, rapidly rejected by President Trump who has demanded $2,000 per person.  The counter-argument has to do with our ever-expanding U.S. fiscal debt.  It’s a political football right now, and we’ll see how it plays out.

Looking further at U.S. debt, it is currently at $27 trillion (yes, with a “T”) and just added $900 billion more with the new stimulus.  The $2,000 payment would increase that amount by another $500 billion.  And, importantly, this money is not coming from tax revenue.  It is entirely debt as issued via U.S. Treasuries.  It will have to be paid back in the future, which is a burden on the coming generations.  Sending more money to individuals may seem like a no-brainer, but it’s a complicated choice.  I’m not suggesting one view or argument is better than the other, just trying to understand and report the whole story.  I’ve mentioned before about how these stimulus funds are nearly direct-injected into our economy.  Milton Friedman famously said that inflation is “always and everywhere a monetary phenomenon…”  For those who believe that sentiment, then the concern of coming inflation is significant.  And the market is recognizing that with inflation-protected bonds showing the strongest relative strength of any of our normally researched investment asset classes at quarter-end.  I don’t know if inflation is coming, but it needs to be closely watched.