Given that here in CT we had our first snow cover in early November, I feel confident saying that we said goodbye to fall. Now the winter months lie ahead. But the calendar will say March before we know it and hopefully the warm-up will start shortly thereafter. I hope you all make the best of winter and maybe even get away to a warmer place for spell. Stay safe and here’s hoping we warm up soon.

The photo below is of Sandra and me along with my nephew, Eric. Behind is an F-16 military fighter plane. Eric is in the Air Force and we traveled to Arizona for his graduation from F-16 fighter pilot training. It was a fun and educational experience for us. It is simply amazing the amount of time and effort that goes into getting one of these planes into the sky, not to mention the pilot training and plane maintenance that goes along. 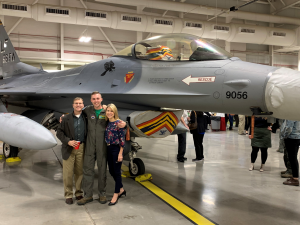 The Federal Reserve (Fed) lowered rates again in October after reductions in July and September. The current reserve rate is now in a range from 1.50% to 1.75%. My feeling is that these reductions were done to prevent over-reaction to the ongoing stories of the global trade war, possible Presidential impeachment and deepening tensions with Iran and North Korea. After seeing slowing growth in 2019, it appears to me that we will see a moderate resurgence of growth in 2020. This long expansion looks like it will continue for a while longer. Employment is strong, consumer spending is strong, wages are moving higher, corporate profits are good and the Federal Reserve has provided plenty of monetary easing.

Politically, the U.S. has experienced the third Presidential impeachment in its history. Though, some argue that impeachment is not official until the terms have been sent to the Senate. I am aware of, and sensitive to, the strong opinions about this topic. Let me simply say that from the behavior or our President, to the behavior of our Congressional Representatives, I think this is far from our brightest moment in history. I expect those terms will be sent to the Senate and we will see that trial develop in January. I’m not at all looking forward to the drama. For the first quarter of 2020, I will be adding exposure to emerging markets, reducing exposure to hi-yield bonds and adding some additional fixed income diversification by adding a position in mortgage backed securities. We will remain overweight U.S. exposure and out of inflation-protected bonds. Real estate will remain the sole alternative investment choice.