Rising Gas Prices Around the World 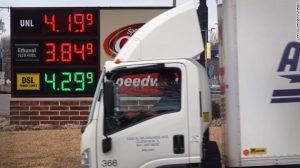 The U.S., and much of the world, are already facing increased inflation as inflation rates are now hitting levels not seen since the early 1980’s (check out our Financially Speaking from Dec. 2021 for more on inflation). To make matters worse we are also seeing quickly rising gasoline prices, which makes the cost of going to work, or taking the kids to daycare, more expensive. And for those in the lower half of the income spectrum, the cost of gas causes greater pain because a larger portion of their income, as a percentage, is spent on gas. So, it is a regressive extra expense because it is more painful to the poorer citizens. Given the large amount of media attention, and public outcry, I want to dedicate this Financially Speaking to the topic of gas prices and the oil markets in general. This is a new topic for me, but as always, the team at Barron Financial Group are only a phone call or email away if you have further questions or prefer a personal discussion.

Before we get too deep into gasoline prices, let’s start with some basics. Crude oil is where gasoline comes from as crude oil can be refined into usable gasoline. Thus, the two items are inextricably connected, and one price has an automatic influence on the other. In 2020, the U.S. was the world’s largest producer of oil, much of it refined into gasoline for use in the U.S. In 2021, the U.S. slipped to the third-place oil producer, behind Saudi Arabia and Russia. Much of that drop had to do with affects from the COVID-19 pandemic. As the country went into lock-down mode in April 2020 people stopped travelling, gasoline usage dropped, and the price of gas went as low as $1.77 per gallon. At that time a barrel of crude oil was selling for about $25. In short, the lack of demand, and the high level of supply, pushed prices down. This led to a significant reduction in oil production in the U.S. because the selling price wasn’t profitable for producers. In addition, pandemic-related labor issues caused many producers to miss their production targets. As we progressed through 2021 and the pandemic shutdowns were relaxing, gasoline usage began rising, but the supply remained low. By December 2021 the average price of gasoline was $3.29 per gallon and a barrel of crude sold for about $75. At this price U.S. production is more profitable, but it takes time for those production rigs to get back on-line. Pandemic-induced labor shortages don’t help. So, the U.S., and the oil industry in general, is scrambling to get production back and improve supply. The result is a growing gap in supply, thus exacerbating the price per gallon increase generated by greater demand.

It is generally accepted that a $10 increase per barrel in the price of crude results in about a $0.25 price per gallon increase in gasoline. In November 2021, the month Russia started building up troops around Ukraine, the price of crude oil was in a range of about $70 to $80 per barrel. At that time, Russia was the #2 oil supplier in the world and there were no concerns with its supply capabilities changing. Russia supplied a small amount of oil, about 8% of total need, to the U.S. Since Russia invaded Ukraine, the U.S. has terminated its oil imports from Russia, which leads us to the next part of the story.

Crude oil is a global commodity.  The amount of oil being produced, and exported, directly affects the price.  This is why if demand for crude oil increases and OPEC (Organization of Petroleum Exporting Countries) does not increase supply, the result will be a supply/demand gap causing the price per barrel to increase.  Before Russia invaded Ukraine it was consistently the 2nd or 3rd highest oil producer in the world.  After Russia invaded Ukraine most Western countries applied onerous sanctions on them and greatly curtailed their ability to sell and export oil.  Meaning the 3rd largest producer in the world went off-line with the only exception being export to countries not following the Western sanctions regime such as China and Iran.  Losing that large amount of supply, with demand growing as the pandemic abates, is a recipe for a growing supply/demand gap, and higher prices.  That lack of Russian supply has turned the global oil market upside down and prices shot higher in response.  And it happened quickly.  As of March 2022, crude oil is about $105 per barrel and gasoline is at about $4.25 per gallon.  For the U.S., losing its 8% supply from Russia isn’t that critical.  Most experts expect U.S. production to catch-up and fill that gap.  But that doesn’t help the global oil market that just lost a great deal of supply from its #3 producer.

The next piece of this story I want to cover is about the political repercussions.  As with so many important topics facing our nation, the price of gasoline has become a political, partisan argument.  On the left, the argument has moved toward oil companies price gouging consumers and following unreasonable greed as capitalists run wild.  There’s no credible evidence to support this view.  On the right, the argument is that the Biden administration has strangled U.S. oil production and shutdown the Keystone pipeline, all leading to our lack of supply causing prices to increase.  This too, is not true.  Looking at the details, the Biden administration has issued more oil production permits on public land than the Trump administration did.  And although cancelling the Keystone pipeline will impact long-term North American oil production, the pipeline would not have been competed yet, so it would have no effect on prices today.

My final point to consider is that like many current trends we are dealing with, some of the oil supply/demand gap and rising gasoline prices has been caused by pandemic-related issues.  Shutdowns reduced gasoline consumption, leading to lower prices and oil production reductions.  Labor issues posed productivity problems with still operating oil production rigs.  Russia’s invasion of Ukraine then took an already bad situation and made it much worse by greatly reducing global oil supply.  I continue to believe that the pandemic situation is improving, and these pandemic challenges will improve over time.  Even if I’m right about that, I don’t expect we will see Russia get past its current tag of being labelled a “pariah” state, by many Western and non-Western nations.  Thus, the sanctions won’t be removed anytime soon, and the former #3 oil producer won’t be supplying anywhere near what it once did.  The oil supply is affected now, and likely for a long time to come.